Aligarh Muslim University (AMU) occupies a unique position amongst universities and institutions of higher learning in the country. It was established in 1920, and evolved out of the Mohammedan Anglo-Oriental College (MAO College) which was set up in 1877 by the great visionary and social reformer, Sir Syed Ahmad khan. From its very inception, it has kept its door open to the members of all communities and from all corners of the country and the world. The Aligarh Muslim University is the realization of a vision which was broad, far- reaching and realistic

Spread over 467.6 hectares in the city of Aligarh, Uttar Pradesh, Aligarh Muslim University offers more than 300 courses in the traditional and modern branches of education. It draws students from all states in India and from different countries, especially Africa, West Asia and Southeast Asia. In some courses, seats are reserved for students from SAARC and Commonwealth Countries. The university is open to all irrespective of caste, creed, religion or gender. It ranks 8th among the top 20 research universities in India.

In spite of the establishment of a numbers of universities and institutions of higher learning all over the country, this university has been maintaining its national and international character as an institution of excellence. It has more than 28,000, students, 1,342 teachers and some 5,610 non-teaching staff on its rolls. The university now has 12 faculties comprising 98 teaching departments, 3 academies and 15 centres and institution. A special feature of the university is its residential character with most of the staff and students residing on the campus. There are 19 halls of residence for students with 80 hostels.

The university has opened two new centres of study outside Aligarh w.e.f. 2011 at Murshidabad, West Bengal and Mallapurum at Kerala state. At present teaching facility of MBA and Integrated Law course is available in these two centres. It is projected that in ten years down the time line both the centres will have more than 10,000 students each in advance study and research.

The university maintains one primary, seven High schools (including one for the Visually Challenged), and two Senior Secondary schools for boys and girls. The University also offers courses in Indian, Oriental and Western Languages. The medium of instruction in the university is primarily English.

Games and sports have been a distinctive feature of the AMU. The Cricket, football, hockey, Tennis, Basketball, Skating and Horse Riding teams have excelled at the inter-University level. Perhaps this is the only university with a Horse Riding Club.

The General Education centre is the nucleus of most of the extra-curricular activities and caters to the cultural environment. This centre organizes these activities through its various clubs viz., the AMU Drama, the Hindustani and western Music Club, the Literary Club and the Hobbies Workshop etc.

It is proudly Islamic and proudly Indian institution: a living symbol of composite culture of India and a bulwark of its secular principles. 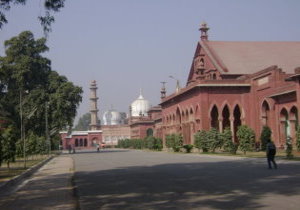