A special feature of the University is its residential character with most of the staff and students residing on the campus. AMU is truly representative of the country's multi-religious, multi-racial and multi-lingual character. At Aligarh, Muslims, Hindus, Sikhs and Christians come from all parts of the country - right from Kashmir to Kerala and from Gujarat to Assam - bringing with them different cultural traditions. They live here on the campus in the same rooms, dine on the same tables, play on the same grounds, and share together the joys and concerns of residential life. This traditional and harmonious corporate living has made a major contribution to the development of a broad, cosmopolitan and secular attitude in Aligarh.The higher objective behind the establishment of this university was not merely the dissemination of knowledge but to provide the necessary skills and mental attitude to face the vagaries of life. Sir Syed made a distinction between Talim (education) and Tarbiyat (training) - the former prepared a person for an occupation, and the latter was designed to make him a refined person.government.

A Hall of Residence is a cluster of hostels administered by a Provost and a number of teacher wardens who look after different hostels. All inmates are required to dine in the common Dinning Hall, unless exempted by the Provost. The Halls of residence are the centres of corporate life in the University. Each Hall maintains a Common Room with facilities for indoor games, a Reading Room, Library, Sports Clubs and a Literary and Cultural Society. Self-governance by students is encouraged. The Provost and Wardens seek the cooperation and assistance of Monitors and other representatives of students in the administration of the Hall of residence and in maintaining discipline. 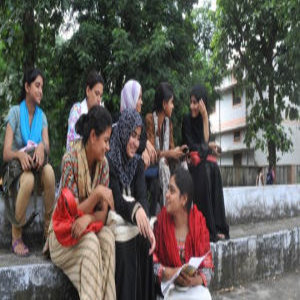