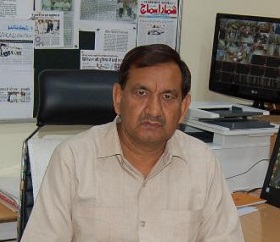 Dr Amjad Ali is India?s only D. Litt. degree holder in Library and Information Science. His area of specialization is the application of Information and Communication Technologies in the university libraries. During his librarian ship, the Maulana Azad Central Library of the Aligarh Muslim University was declared as the best amongst all Indian universities by the National Assessment and Accreditation Council of India in February 2015 following a massive digital drive by adding a wide range of electronic databases, digitization of contents and conservation of rare manuscripts and books which put AMU ahead of all the contributors to MHRD projects in the country. The Library stood first in terms of providing data to Shodhganga during his librarianship and is now the largest contributor to the National Digital Library of India (NDLI).

The Digital Resource Centre which was established through his efforts now satisfies research needs of about 90% of the users through digital content delivery free of cost. He has taken special initiatives in preserving and digitizing the indigenous resources and special collections, a work which gained momentum once again during his second term of librarianship.

For the first time, Dr Amjad Ali started the subscription of research databases including ProQuest. Scopus and EBSCO and promoted their usage by creating awareness amongst the research scholars and faculty members. Some workshops and other special events were also organized to popularise the resources.

Dr Amjad Ali has published 15 books and over 40 research papers, mostly on the application of ICT in academic libraries. He has also translated a dozen engineering books for the National Council Promotion of Urdu Language of MHRD's and also ?Ignited Minds?, authored by Dr APJ. Abdul Kalam which has been published by M/S Penguin Books. He has been the guide and examiner for Ph. D. and M. Phil. degrees of many universities and 11 students have been awarded Ph. D. and M. Phil. degrees under his supervision.

In 2017, Dr Amjad Ali was specially invited by UNESCO to present a paper in the World Humanities Conference held in Belgium. The paper is based on the case study of users of the Digital Resource Centre of Maulana Azad Library, a facility which he has developed during his previous tenure. In 2016, he presented another paper in the London International Conference on Education. Recently, he was specially invited to attend the 12th World Education Summit 2018 in New Delhi. Dr Amjad Ali has visited 10 countries including England, France, Belgium, Germany, the Netherlands, Turkey and Saudi Arabia.

Dr Amjad Ali paid special attention to the needs of the differently abled, mainly the visually impaired by arranging latest gadgets including two Refreshable Braille Display Units free of cost from a Mumbai based NGO which convert digital text into speech as well as in the Braille script. The new Angle Pro which he added to the Braille Section has wonderful features of recording, retrieving and displaying the digital content. By availing the facilities offered to them, the highest number of students qualified the national competitions between during the years 2013 and 2016.

An Alumnus of the Aligarh Muslim University, Dr. Amjad Ali started his service career from Doordarshan Kendra, Kolkata and was selected for a commissioned job in the National Library of India but he preferred to join as founding Librarian of the Mass Communication Research Centre, a very prestigious institute at the Jamia Millia Islamia, New Delhi wherefrom he shifted to the Aligarh Muslim University as Deputy Librarian in 1993 and is working as University Librarian now.