Aligarh Muslim University, Aligarh is situated in the middle of Doab – the land between the Ganga and Yamuna rivers, at a distance of 130 km Southeast of Delhi on the Delhi-Howrah rail route and the Grand Trunk Road. The latitude is 27o 54' N and longitude is 78o 05' E. The climate is hot and dry in summer and cold and dry in winter with an intervening rainy season. The University campus is 2 kms away from the Aligarh Railway Station.

Malappuram is the headquarters of the district of the same name in the state of Kerala. It literally means 'a land on top hills' and is situated 50 km southeast of Kozhikode, bounded by the Nilgiri hills in the east, the Arabian Sea in the west and Thrissur and Palakkad districts in the South. The Malappuram district extends from 10 oand 12 oN latitudes and 75 o to 77 olongitudes. The climate is generally hot and humid with the annual range of temperature varying between 20oC and 30oC.

Murshidabad district got its present name from the Nawab Murshid Quli Khan who made Murshidabad the capital city of Suba Bangla, comprising the Bengal, Bihar and Orissa. The district of Murshidabad is situated to the south of the Ganga River in West Bengal. It extends from 23o 43' to 24o 52' N latitudes, and 87 o49’ to 88 o44' E longitudes. Murshidabad has a tropical wet and dry climate and the monthly mean temperature varies from 17oC to 35C. 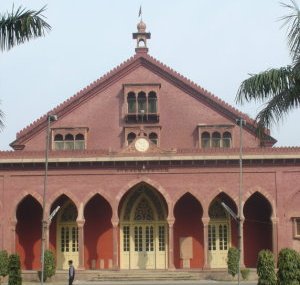